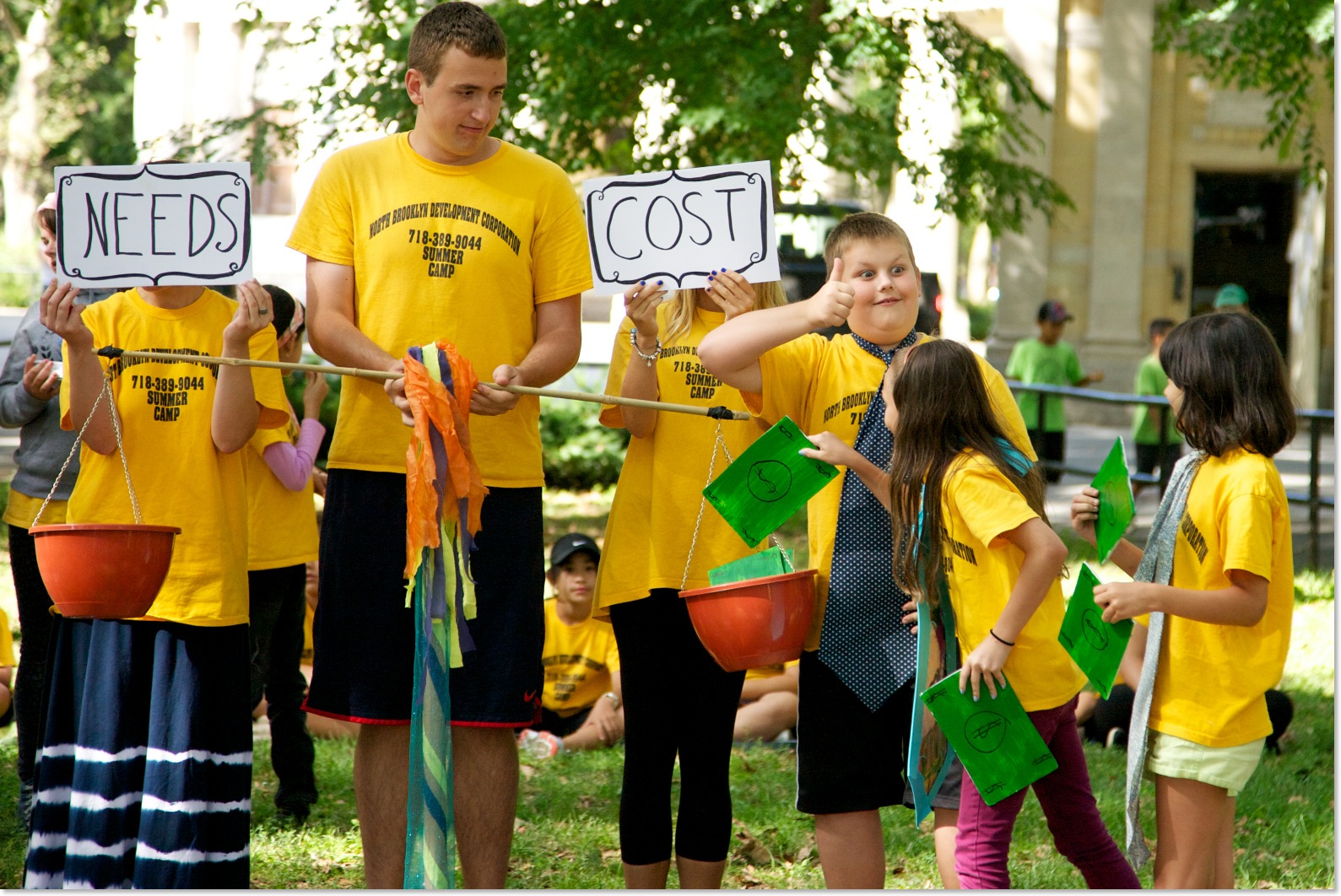 by Sherry Teitelbaum and Kevin Ray

Day 8: Putting It Together

Day 8 saw intense, focused work as we sequenced our original material to tell our story. Kevin introduced music he had composed for each section. Heather worked frantically to put the final touches on many of the puppets the young people had built, dashing between our workshop construction room and the large cafeteria that was our devising space. The three of us brainstormed on how we could turn some of the 4th and 5th graders’ ideas for community projects (for example, an eco friendly airport) into black and white object puppets for use in a giant human scale which the young people had created with their own bodies. And whenever we were free, we painted, painted, painted. The day’s big discovery: why not try a voice-over edited into the music to tell the story of Part I, “Falling Woman: The Myth of the Creation of Newtown Creek and Greenpoint”? And so Kevin spent the night creating a voiceover track!

On the morning of our performance, we went outside to the playground at PS 34 and rehearsed each group one at a time. After lunch we brought all of the groups together for a final run through. 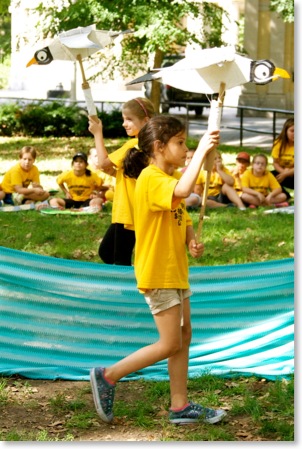 At 3 p.m. the youth picked up their puppets and began parading from PS 34, through the streets of Greenpoint to McGolrick Park. At the park we performed for an audience of over 125 people including youth from School Settlement’s Day Camp, our young people’s family members, friends, and Greenpoint community residents. At 3:30 pm, we performed a three-part show: Part I was a myth of the creation of Greenpoint; Part II was the gentrification of Greenpoint expressed through a puppet dance between trees, houses and skyscrapers; and Part III was a zany Community Participatory Budget Circus inspired by our youth participants’ observations made during a process drama activity earlier in the workshop. To see more pictures from the show click here.

The performance was a fantastic culmination to our workshop. A guest from the NYC Department of Youth & Community Development (DYCD) told Kasia, the director of the summer camp, that the show was, “Like being in Wonderland!”

This was our time to get feedback from our young participants and find out what they had enjoyed about the project and what they had found challenging. It was also our opportunity to say goodbye and acknowledge the wonderful work the young people had done. Kevin, Heather and Sherry designed short, interactive evaluation sessions that matched the developmental abilities of the participants, since their ages ranged from kindergarten all the way up to 5th grade. With the youngest participants (grades K, 1 and 2), we used a technique called “turn and talk” in which you turn to a partner, discuss a question together, and then share your answer with the larger group if you so wish. With the older participants (grades 3, 4 and 5) we used a fun approach called “graffiti board” in which you write your answers to questions on large pieces of chart paper taped to the walls. We discovered that many of the older participants were leaving the project with a very different understanding of what a puppet was and how it could be used, as well as with a firm grasp of how to build a puppet from scratch. We also learned that many in the group found paper mâché (which they dubbed “papa macho”) challenging. 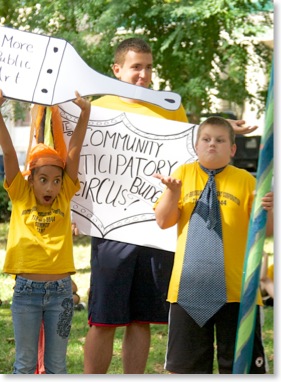 the most rewarding moment in the day was when the 4th and 5th graders who had participated in a process drama about community participatory budgeting over a week ago demanded to know which community group had been awarded the $1 million which had been at stake. We abandoned our planned session and followed their lead, using a game called “Four Corners” to determine who would receive the funding. The young people decided that the money should go to Greenpoint’s teachers, stating quite clearly that without good teachers, the other interest groups would not even exist!

Days 6 and 7: Building a Movement Vocabulary in a Basement 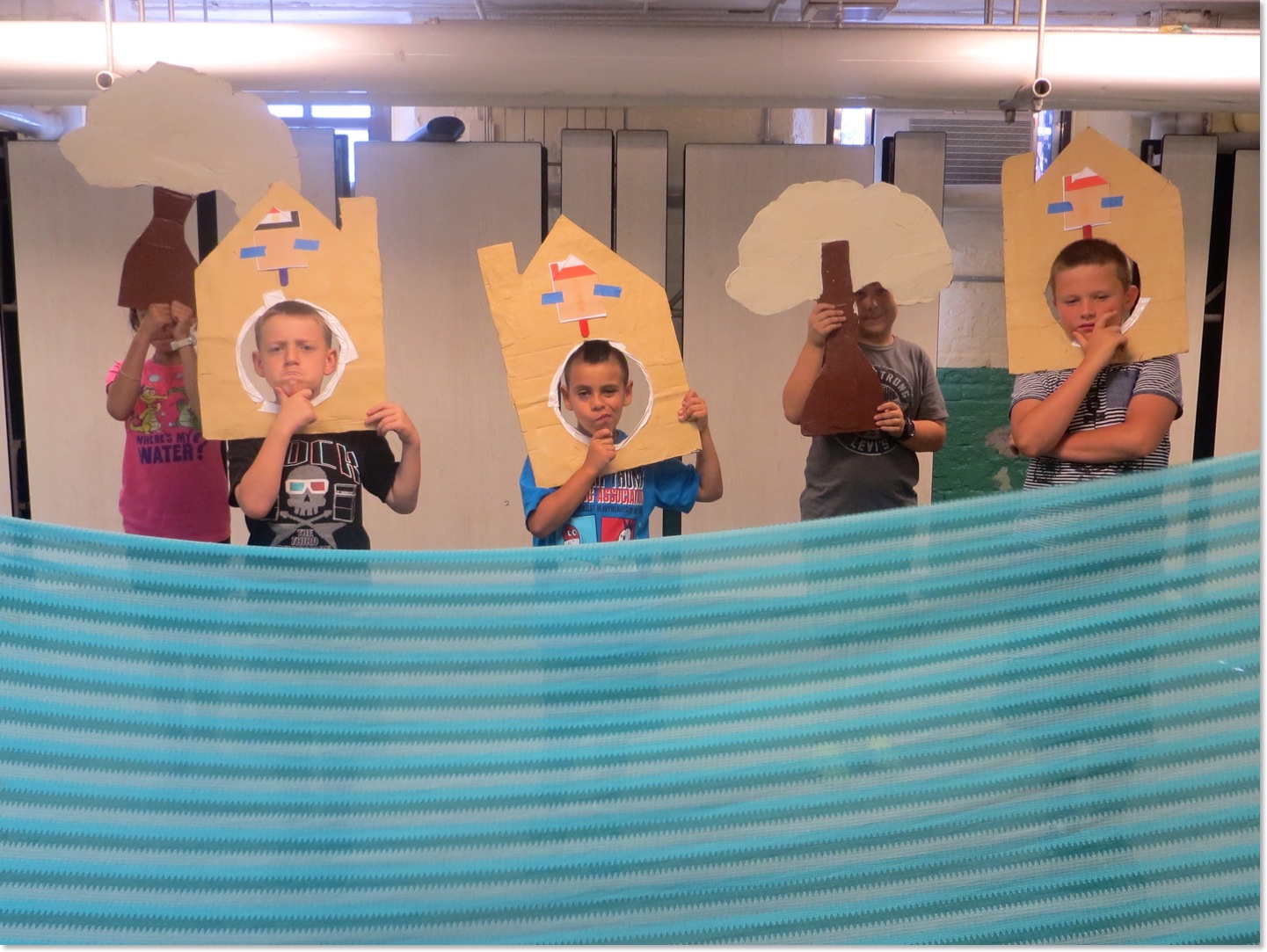 Days 6 and 7 consisted of two days of intense, creative devising as the young people experimented with the puppets they had constructed and painted in the first week. Kindergarten, first and second graders discovered all the movements they could make with their shrimp hand puppets, buck-toothed beavers, hot pink and orange fish, laughing gull rod puppets and a supple piece of striped blue cloth representing Newtown Creek. Third graders explored how to make their trees, houses and skyscrapers dance, transforming an open playing space into a crowded cityscape. Fourth and fifth graders continued to find movements and poses that expressed their four community interest groups: artists, teachers, business people and military. Then they explored how to build a giant human scale with their bodies that could weigh competing community needs. Normally we devise outside in the school’s playground, but rain drove us into a large basement cafeteria space for these sessions (the very space we will use for the public performance in case of rain on Thursday afternoon, August 15!). Creative cacophony reigned as small groups worked simultaneously with Kevin, Sherry and Heather in different parts of the room, then joined together to share what they had crafted. At one point in Day 7, the cafeteria reverberated with the voices of the three facilitators and the camp counselors coaching their groups, gleeful giggles, a chorus of “tick tocks” and “happy dance,” and circus music which Kevin played on his smart phone to inspire silly walks and an accelerated tempo. By the end of the two days we had established a movement vocabulary and tried out some preliminary sequencing. The challenge for tomorrow: how can we tell a strong, clear story in each of the three parts of Tides of Change? Read More...
Comments 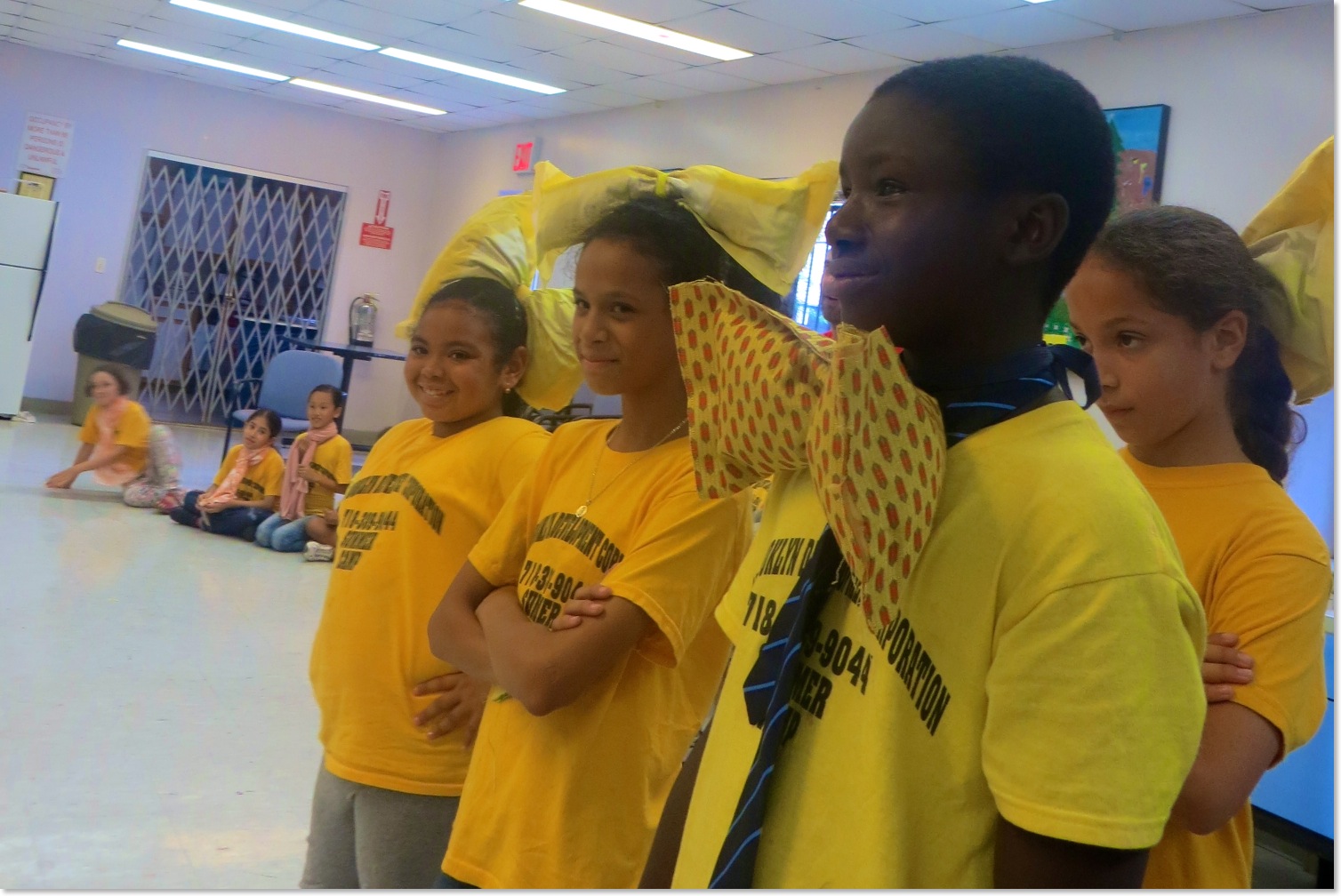 A highpoint of the Newtown Creek Celebration each summer is our intergenerational workshop where the 4th and 5th graders participating in the project visit North Brooklyn Development Corp.’s Dupont Senior Housing unit. They work side by side with the older adults that reside there to create puppets, costumes or props for use in the outdoo 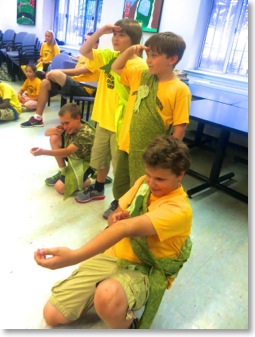 r performance at McGolrick Park. This year Heather and Kevin brought over bags stuffed with recycled fabric from Materials for the Arts. Young people and older adults worked together to trace, cut, iron, stuff and drape costume elements which suggested the four neighborhood groups that the young people will be playing in Part 3 of the performance: bright scarves for the artists; bow-ties and ribbon bows for the teachers; oversized ties for the business people; and sashes and medals for the military. Then Kevin 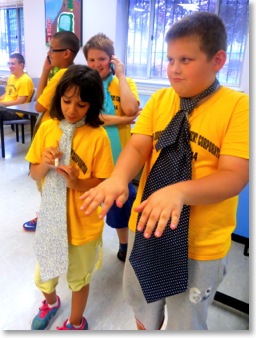 led a session of instantaneous playbuilding as young people created an impromptu fashion show to showcase the new costumes. Kevin narrated the story of balancing competing neighborhood interests as Camp Director Kasia Selwesiuk-Swietochowski translated into Polish. The thirteen older adults laughed and applauded as the young people strutted their stuff and struck tableau poses which were characteristic of each interest group. The fashion show was not only fun, but gave us a leg up on devising, which starts in earnest on Monday. Read More...

Day 4: Adding Up The Puppet Pieces 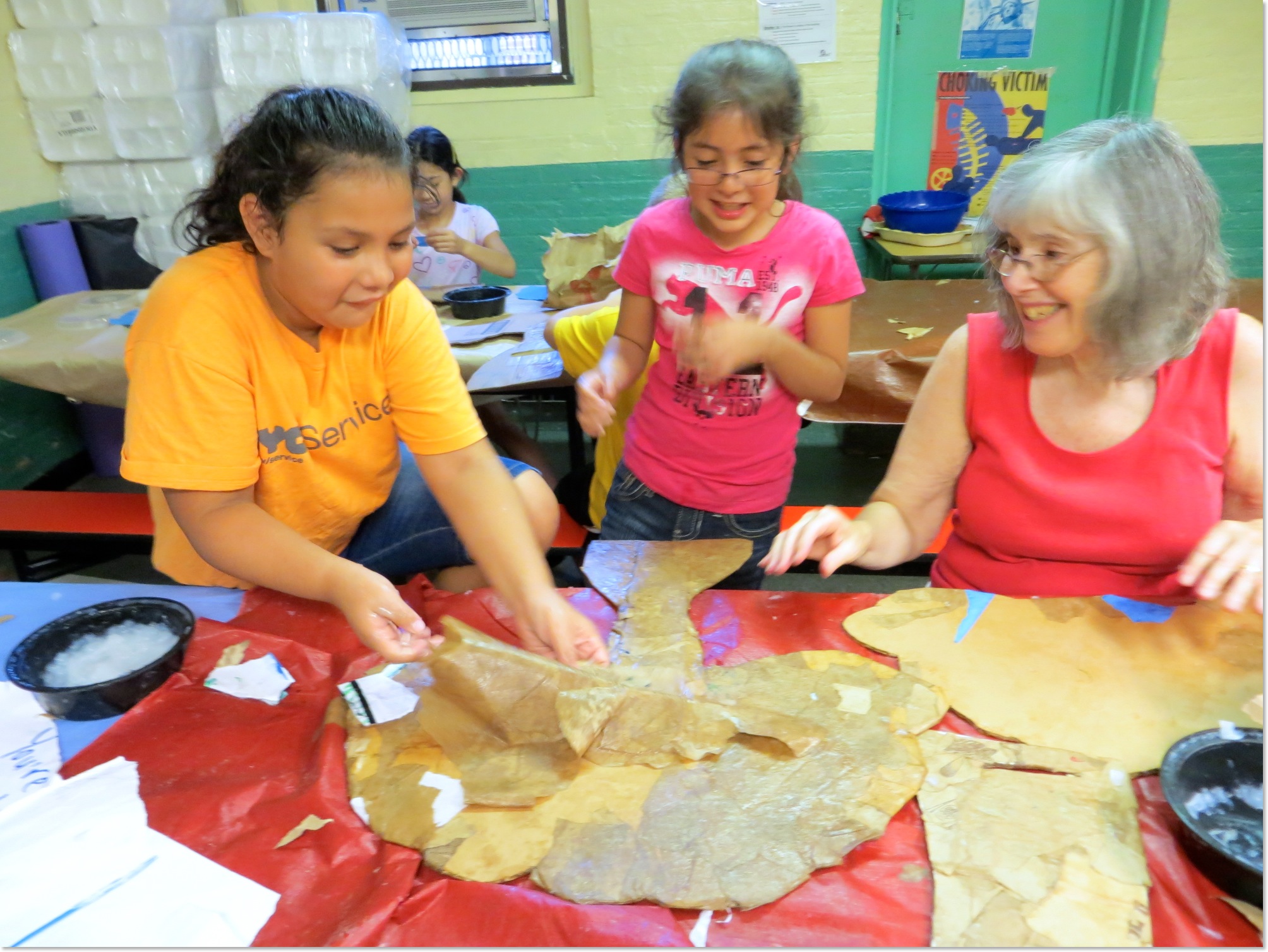 At the end of our third day making pieces that will be assembled into puppets for our final performance, teaching artist Heather Nielsen counted all of the paper mâché components that we have amassed with our youth participants. In total our 80 young people have used recycled cardboard, used paper bags, and cornstarch paper mâché paste to build 120 puppet pieces. The following is Heather's tally:


Now that we have our pieces we move on to the next step tomorrow: painting!
Read More... 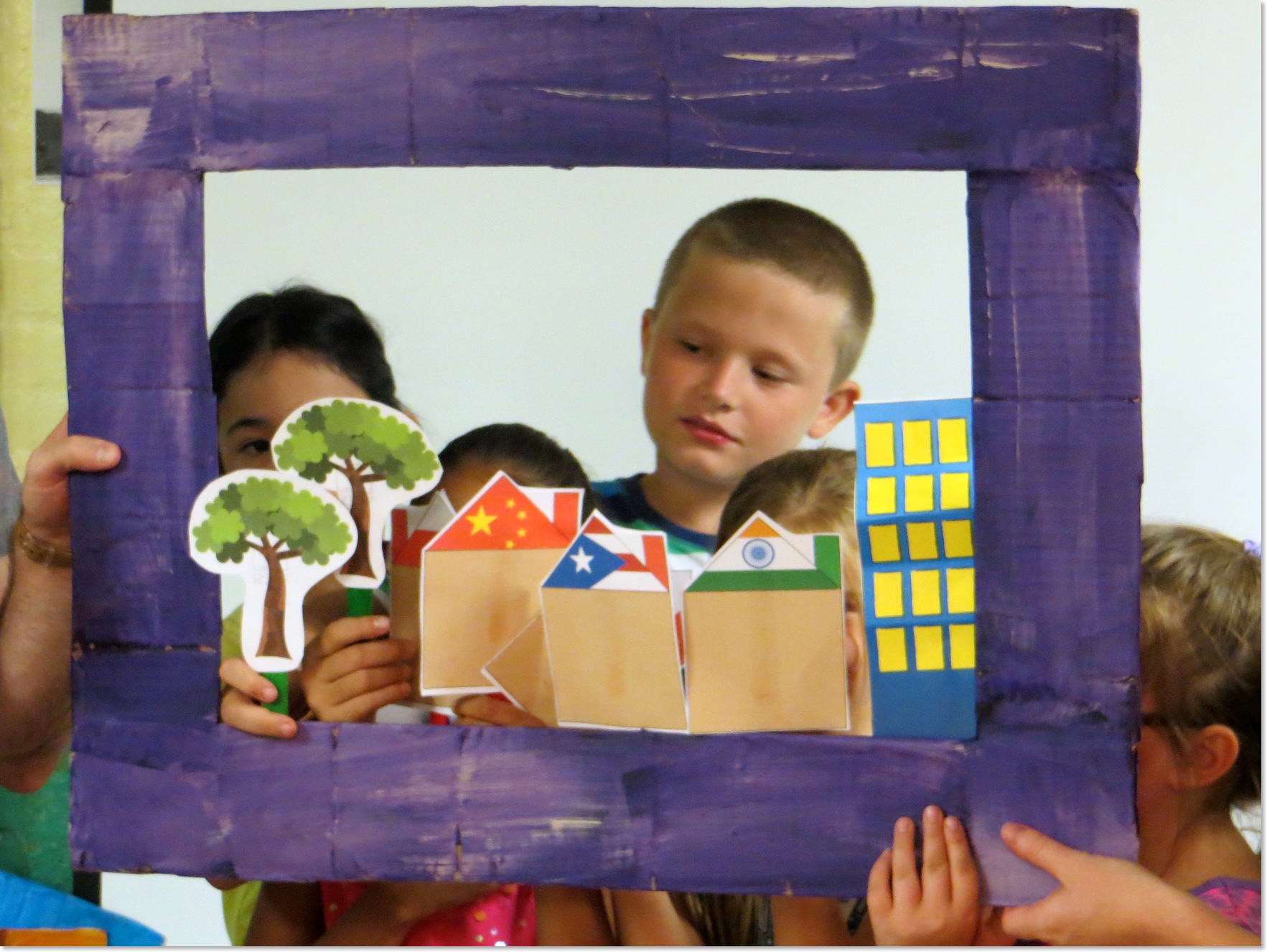 Day 3 was four sessions of paper mâché! Inspired by Kevin’s new mantra, “For today, it’s OK, to be gloppy and gross, all day,” almost eighty young people dipped their fingers into Heather’s special cornstarch and warm water mix and stroked, stroked, stroked until their pieces of torn paper bags adhered smoothly to the cardboard bases of their puppets. Young people were delighted to greet old cardboard friends that they recognized from yesterday’s puppet shows (beaver faces, beaver paddle tails, gull wings, gull bodies, houses) as well as to meet new cardboard pieces that were inspired by the work that the 4th and 5th graders did at yesterday’s Town Budget Meeting (hamburgers, dollar signs, nickels and dimes, wind turbines, trees). High points of the paper mâché sessions were when one girl taught Sherry a call and response song as they worked together on a puppet and the spontaneous creation of a “paper factory” so that children who were bored or needed a change from the gloppy texture could keep the group puppet-making machine going by shredding paper bags at a fast, crisp tempo. Before we moved to the paper mâché work tables, we started each session seated in a circle on the floor so that Kevin could check in with each group to find out what they remembered from Day 2. I was quite moved when one child talked about “a tree that couldn’t breathe any longer and had started to lose its leaves.” 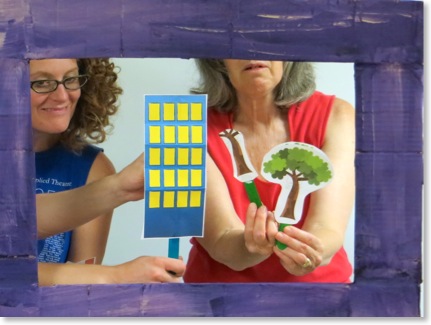 The challenge for this year’s project is to find active, visual ways to explore and represent neighborhood change – as well as how to balance competing agendas for change. Yesterday’s stick puppet show – which showed a neighborhood in flux growing more and more crowded – clearly started third graders thinking about these issues.
Read More...

Day 2: Before the Paper Mâché Comes the Story 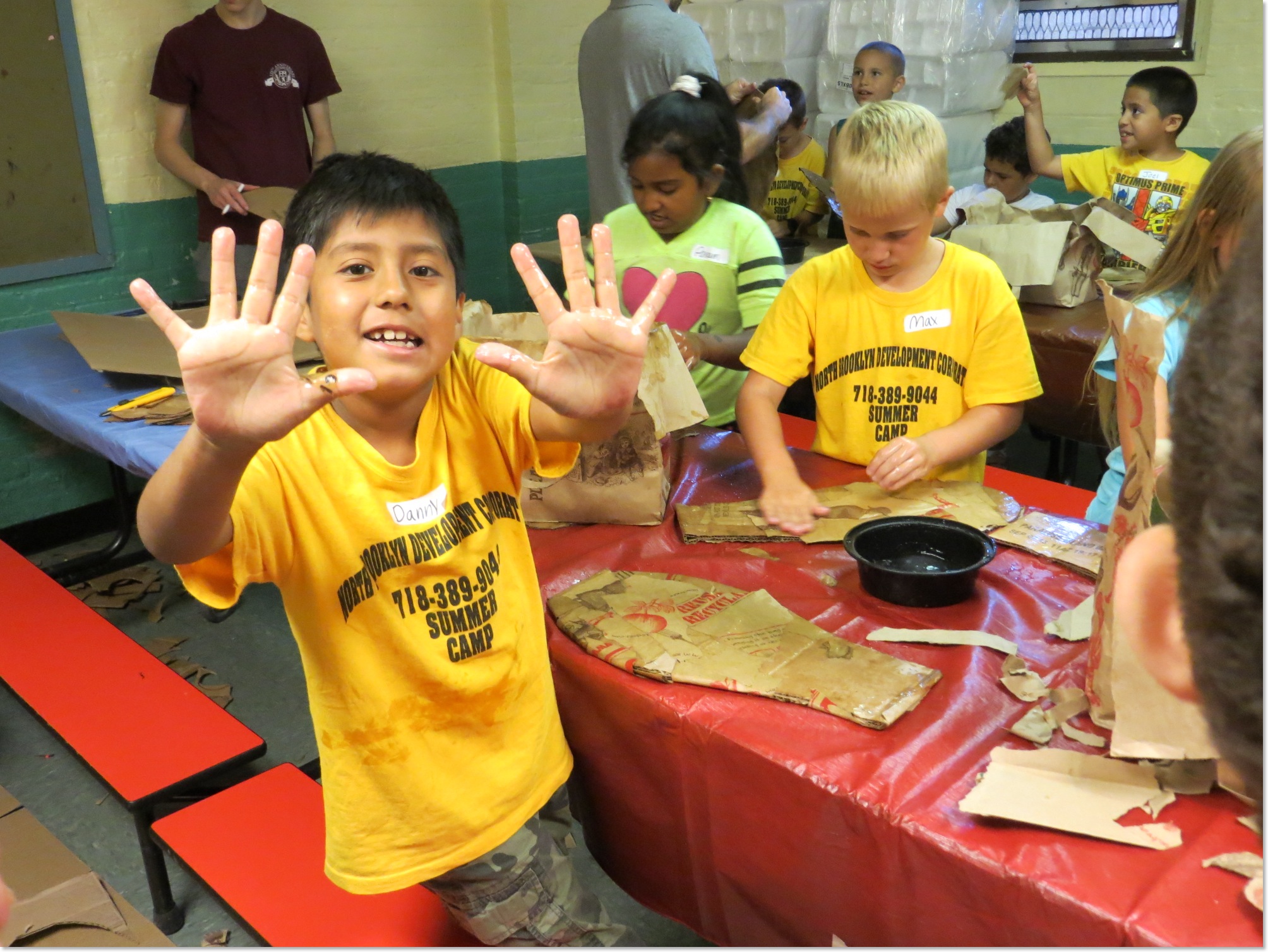 "When are we going to start making the puppets?" was the eager question we were greeted with multiple times before the clock had even struck 9 on Monday morning. The sight of piles of cardboard, paper bags, and paper mâché paste reminded the returning young people of our puppet making process last year and piqued the interest of new campers as they wondered what creatures we would be creating!

Before we started to rip paper and get our hands gloopy with paper mâché, we introduced each group of young people to their section of our 2013 theme: The Tides of Change. Through interactive storytelling, stick puppetry, and process drama, we presented puppets that the youth will be making over the coming days to give them a tangible sense of what their role in this puppet show will be. Read More...

Session One Revised: One Year Later 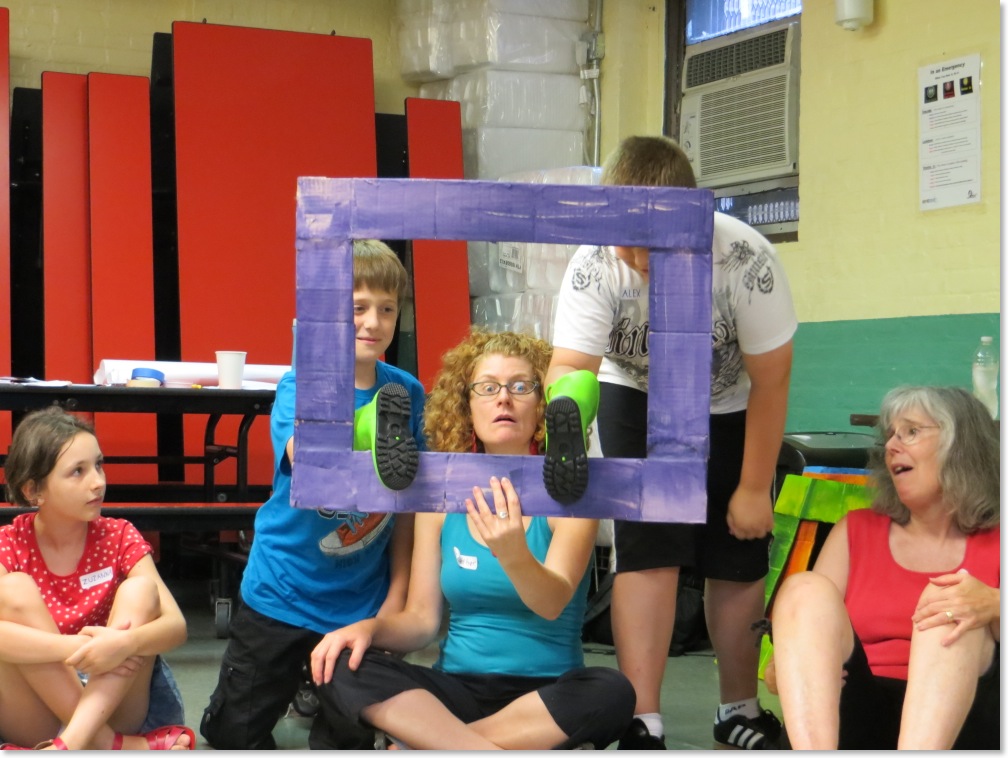 Repeating a community based arts project one year later offers a wonderful opportunity: a chance to do things differently the second time around! After reflecting on our 2012 session plans for Newtown Creek Celebration: Puppet Parade and Pageant, teaching artists Heather Nielsen, Sherry Teitelbaum and I realized that we overlooked an important element: we did not incorporate basic puppetry concepts into our session designs. We never asked the youth questions like: “What is a puppet?”, “Who uses puppets and what do they use them for?” and “As puppeteers, how do we bring inanimate object to life?” We didn’t facilitate hands on activities to develop the youth’s basic puppetry skills. Instead, we jumped right into building puppets and creating a show. Although our 2012 culminating event was very successful, we wished we had built the youths’ puppeteering skills before we began creating the show. So when we received two grants from Brooklyn Arts Council to reprise the project in 2013, we were determined to take a different approach, starting on day one. Read More...

Read about the work happening with people participating in Everybody Act! programs and projects. Join the converstaion about the work in practice by posting a comment at the end of each post!